The UN Secretary-General’s Peacebuilding Fund is the organization's financial instrument of first resort to sustain peace in countries or situations at risk or affected by violent conflict. The Fund invests with UN entities, governments, regional organizations, multilateral banks, national multi-donor trust funds or civil society organizations.The Fund works across pillars and supports integrated UN responses to fill critical gaps; respond quickly and with flexibility to peacebuilding opportunities; and catalyze processes and resources in a risk-tolerant fashion.

The work of the Peacebuilding Fund is possible thanks to the efforts of . These resources are pooled and channelled to participating organizations to promote joint action and multi-stakeholder partnerships, making a difference on the ground.

As per its Terms of Reference, the Peacebuilding Fund may invest in four priority areas:

Established in 2005 by the General Assembly (resolution A/60/180) and the Security Council (S/RES/1645-2005) the Fund supports national and regional priorities to sustain peace in countries at risk of or affected by violent conflict.  Arrangements for the PBF are outlined in the Secretary-General’s report on Arrangements for Establishing the Peacebuilding Fund.

The Fund supports the implementation of the twin resolutions adopted in 2016 on the review of the peacebuilding architecture (Assembly resolution 70/262 and Council resolution 2282)  including through: support for increased UN coherence (through joint analysis, development of strategies and programmatic interventions funded by PBF), emphasis on closer partnerships with CSOs (including by opening up the Fund to direct support to eligible CSOs), focus on inclusivity (by consideration of all vulnerabilities through conflict analysis and a specific programmatic focus on women’s and youth’s empowerment), emphasis on promoting and supporting national priorities and ownership (including through alignment to national strategies, encouraging joint steering committees and through procedures ensuring formal buy-in of Government for all projects) and, finally, support to agreed priorities, in line with PBF’s approved Priority Areas, in contexts spanning before, during and after the end of conflict.

Funds are channeled through two facilities: the Immediate Response Facility (IRF) where any country is eligible for project of up to 18 months, and the Peacebuilding and Recovery Facility (PRF) for countries declared eligible by the Secretary-General following a request from the Head of State or Government for projects of up to 36 months.  Eligibility when granted is valid for 5 years.

The PBF complements the work of the two other primary funds of the Secretary General: the Central Emergency Response Fund (CERF), which finances life-saving humanitarian assistance initiatives, and the Joint SDG Fund, which helps countries deliver on the Sustainable Development Goals through catalyzing integrated, transformative policy change and innovative financial investment.

The PBF provides support in accordance with its niche added value including through continuous innovative approaches, and inclusive/ collaborative peacebuilding approaches, conflict sensitivity and prioritisation. The PBF is the UN Secretary-General’s only dedicated peacebuilding resource within the UN system. Its mandate is to sustain peace through coherent support that brings development, diplomatic and security actors together behind joint peacebuilding objectives. It addresses a ‘market failure’ in the UN and international donor system by providing timely, flexible, catalytic and risk-tolerant finance.  The PBF features strongly in the SG’s priorities and reform agenda as an instrument dedicated to recovery from violent conflict and to engage increasingly before conflict, acting as a hinge to various parts of the UN political, development and humanitarian system.

The IRF is designed to respond to immediate peacebuilding and recovery needs through the provision of flexible and timely funding for targeted projects. Proposals submitted by the UN Resident Coordinator, and that meet Fund criteria, receive resources within a week of approval. The maximum duration of IRF projects is 18 months, with a maximum budget of $3 million. All countries are eligible.

The PRF supports longer-term peacebuilding processes for countries that have been declared eligible by the Secretary General for PBF support, in response to government requests. The eligibility request builds on findings of a conflict analysis to summarize the country’s peacebuilding situation, identify the major peacebuilding needs and priorities, and articulate why the PBF is an appropriate financing instrument. PBSO reviews the request and provides advice to the UN Secretary-General who takes the final decision. In determining eligibility, PBSO takes into several factors, including the government’s leadership and commitment towards sustaining peace, the country’s position within the UN’s strategic agenda, including its Sustainable Development Cooperation Framework, the scope of the country’s peacebuilding needs and gaps, and the likelihood of PBF fully and effectively utilizing its added value. PRF Project durations can be up to 36 months across a five-year eligibility window.

The PBF Advisory Group
Appointed by the United Nations Secretary-General, the Advisory Group provides oversight on the speed and appropriateness of fund allocations.The Group meets twice a year, and also examines Fund performance and financial reports. Ten distinguished personalities are nominated by the Member States to provide advice and guidance to PBSO. Members are appointed for a two-year period.

Administrative Agent
The UNDP Multi-Partner Trust Fund Office serves as the Fiduciary Agent for the Fund. It is responsible for financial management and reporting, receipt of donor contributions and transfers to recipient organizations.

The work of is possible thanks to the efforts of contributors. Since together they have contributed . In the annual contributions amounted to .

Total as of Values in US$

Contributions to trust funds administered by the MPTF Office are pooled with other partner resources to achieve greater impact and leverage the SDGs. This map provides a geographical breakdown of all investments.

* The designations employed and the presentation of material on this map do not imply the expression of any opinion whatsoever on the part of the Secretariat of the United Nations or UNDP concerning the legal status of any country, territory, city or area or its authorities, or concerning the delimitation of its frontiers or boundaries.

Budget amounts in US$

ResultsFocus on impact and results

PBSO places an emphasis on monitoring of results and ensuring there is enough evidence to support analysis of progress.

Direct recipient organizations are responsible for monitoring project results. For joint projects, convening agencies are responsible for coordinating all recipient organizations for joint monitoring of the project. PBF Secretariats, where they exist, help to coordinate monitoring approaches between projects and monitor progress against the peacebuilding context, the risks and the high-level peacebuilding priorities supported by PBF.

Every PBF project needs to undertake an independent evaluation, the funds for which must be included and clearly visible in the project M&E budget in order to be approved by PBSO. A minimum of 5-7% of the project budget should be put aside for monitoring and evaluation activities.

Moreover, PBSO organizes a separate portfolio-wide evaluation every 5 years as part of the PBF eligibility review. Such evaluations are funded and managed by PBSO directly and are an important step in considering continuing eligibility, if requested.

In this section you will find the latest editions of reports that detail Fund performance and results. 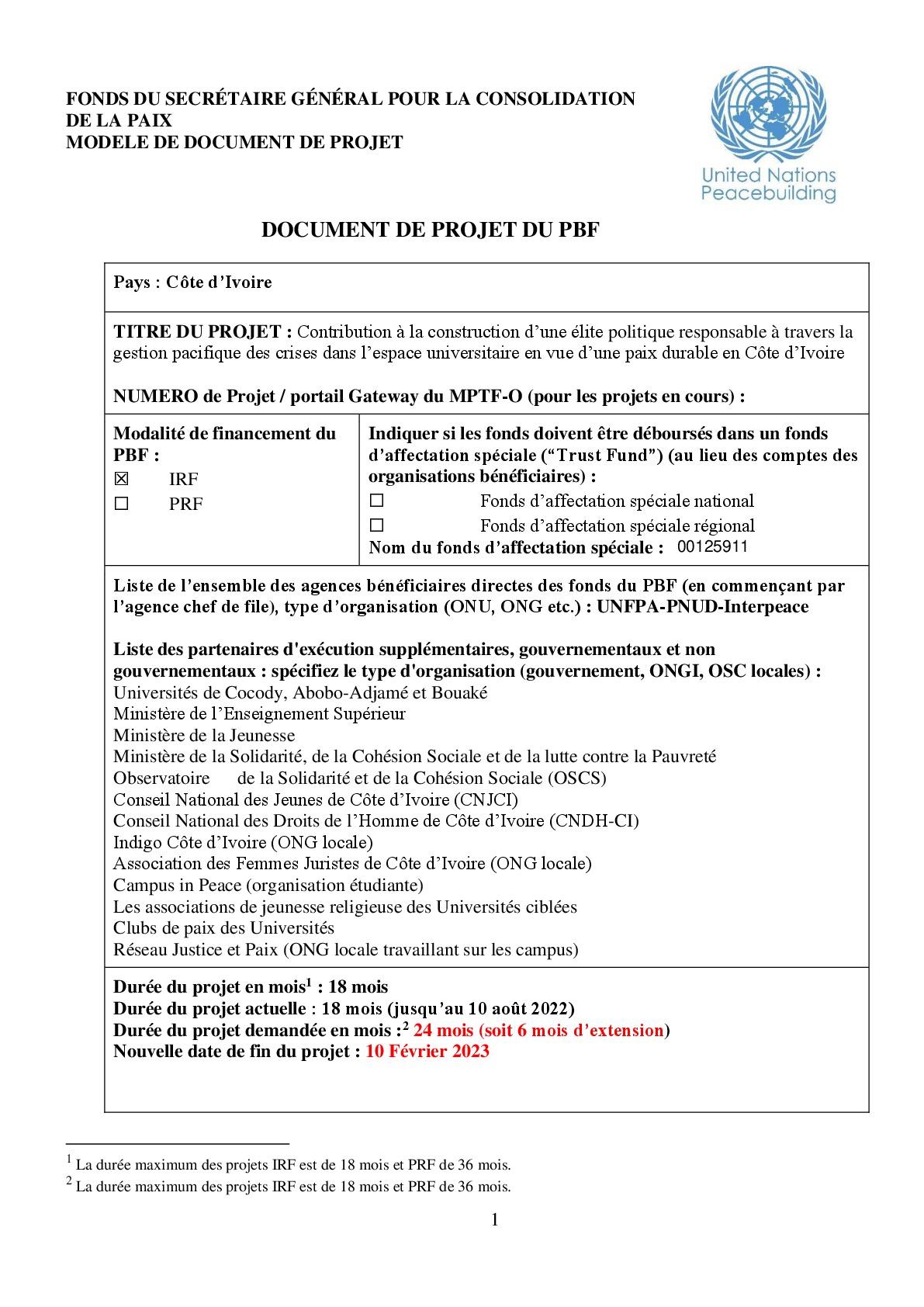 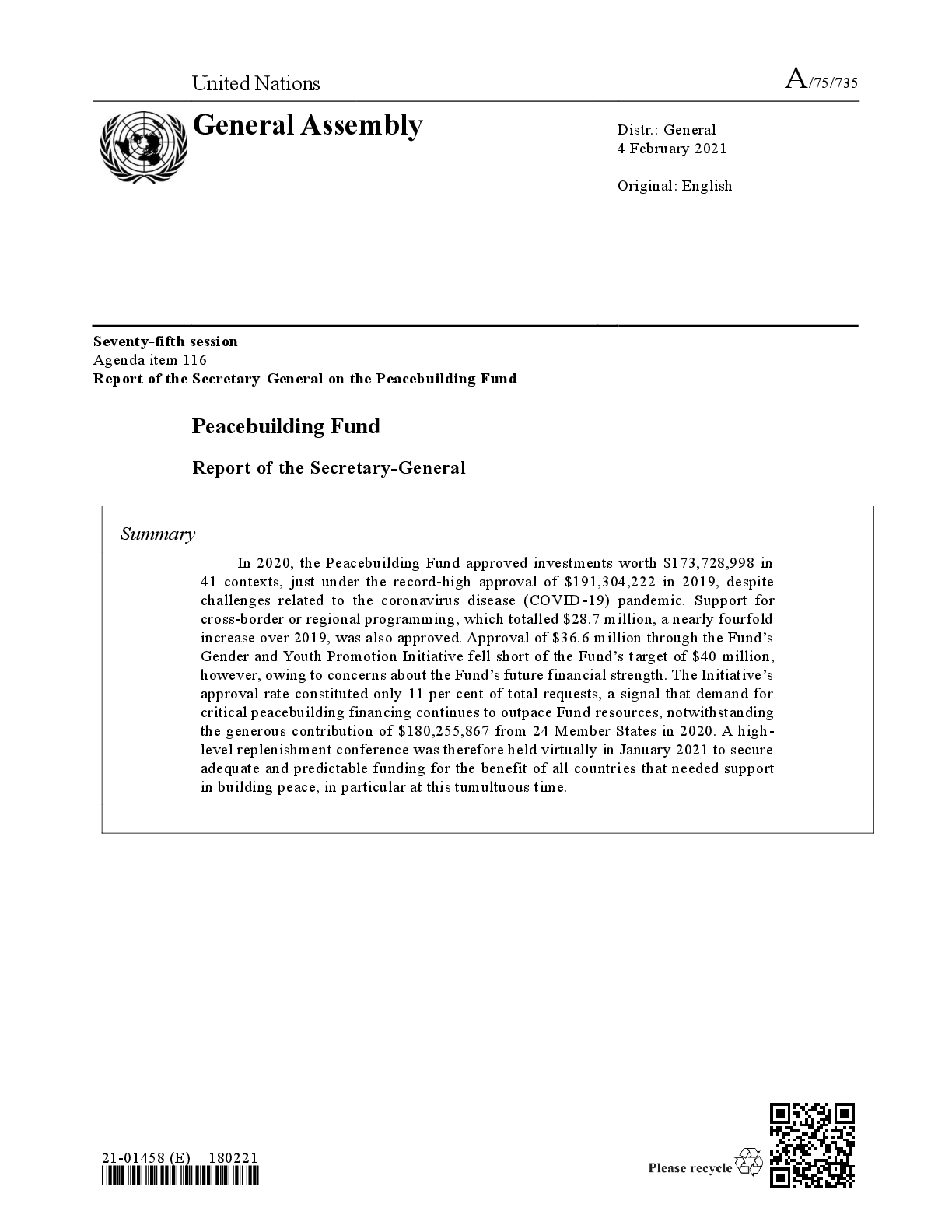 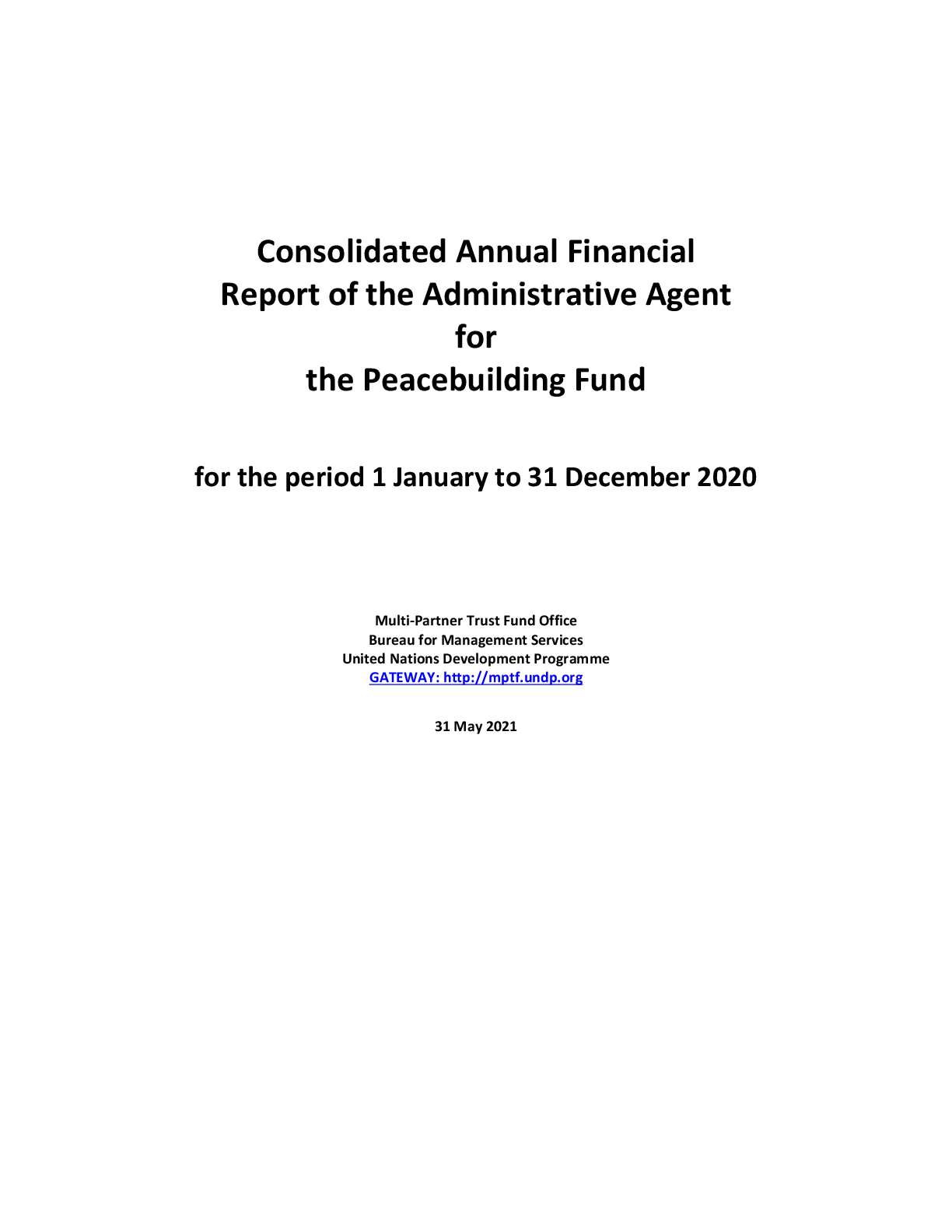 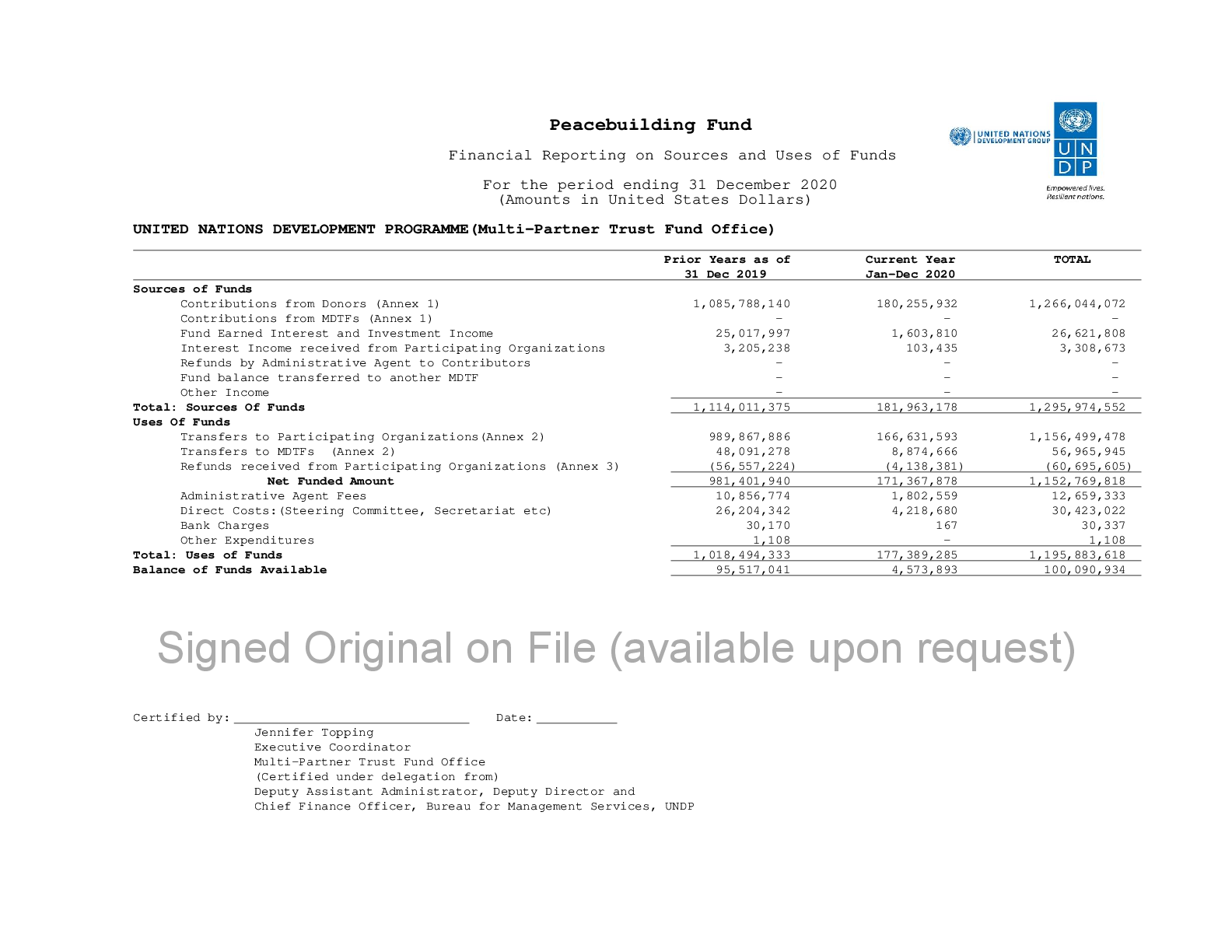 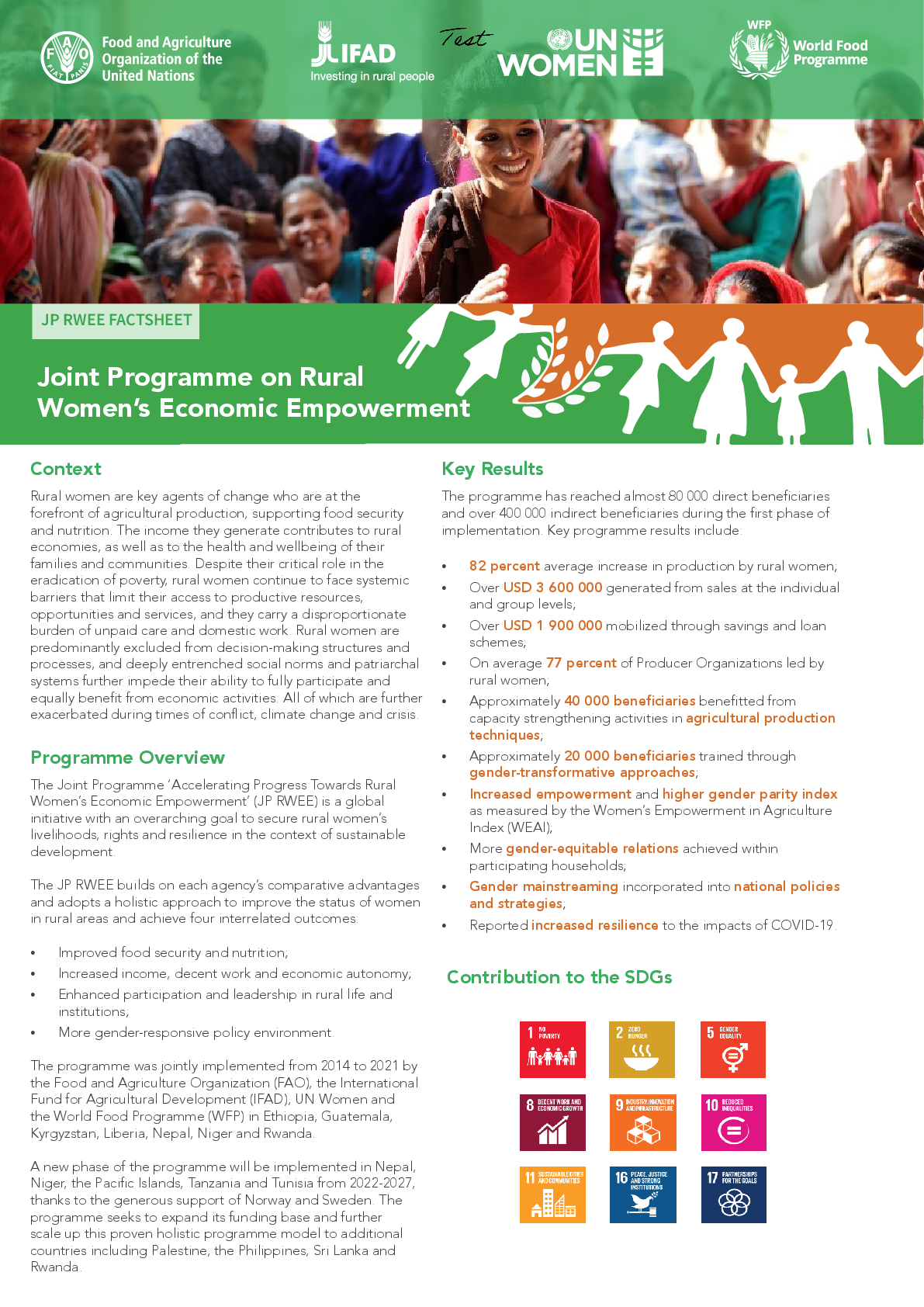